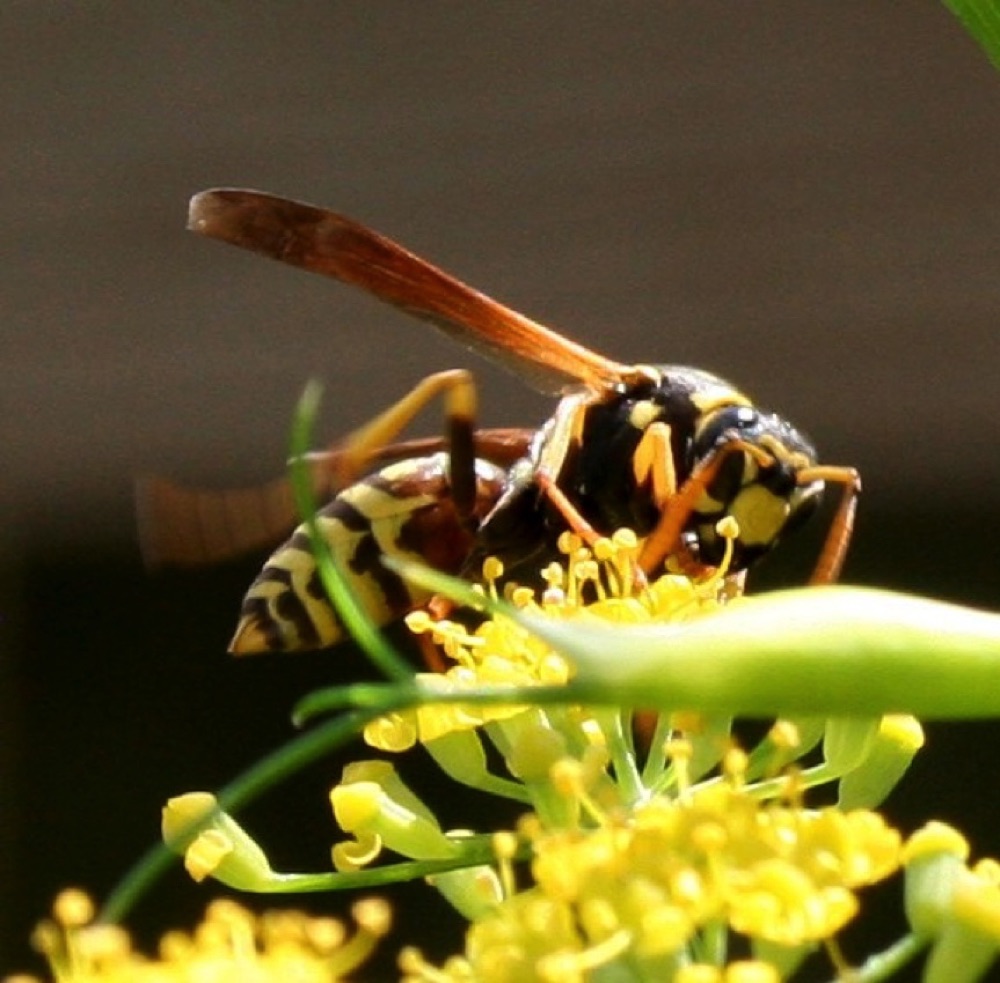 A Pinch of History, a Dash of Legend

Resplendent in her gleaming yellow and black battle dress, Polistes dominula, the European paper wasp, is shown feeding on the author's fennel (Foeniculum vulgare). Like the Europeans who crossed the Atlantic at the end of the fifteenth century, Polistes is an aggressive colonizer. Since invading the New Jersey Pine Barrens in 1968, she has largely displaced native wasp varieties throughout much of the continental United States.

Polistes preys upon caterpillars and other insects, chewing them into a pulp to feed her larvae. But in mid-June, when the photograph was taken, her fancy turns to flowers.

Fennel is cultivated all over the temperate world for its succulent stems, feathery flowers, and crescent-shaped seeds. The taste is familiar to lovers of Italian sausage and Indian curries. It is an ingredient in Chinese five-spice powder, and French quatre épices, two widely used spice mixtures. It is indispensable in baked goods and confectionary items.

Fennel has been used for thousands of years to relieve colic, and to aid in lactation. The latter effect is due to anathole, a compound that mimics estrogen, and gives fennel its characteristic taste and aroma. (See notes below on star anise.)

Map of the East Indies

Fenugreek, Trigonella foenum-graecum, is rich in sotolon, a compound used to create artificial maple flavor for pancake syrup, pipe tobacco, and pharmaceuticals. Fenugreek has been used as a food and medicine for at least 4,000 years. Authorities on herbal medicine consider it to be the sovereign galactagogue–substances that stimulate lactation in nursing mothers. When used for that purpose, the ideal dosage is achieved when the sweat and urine of both the mother and baby smell like Mrs. Butterworth's.

Pirate Billys's crew may well have been stoned on more than ordinary grog–a two-to-one dilution of water and 100-proof rum issued daily to British sailors for over three hundred years, ending only in 1970. Pirates were particularly partial to a beverage called bumboo–grog supplemented with sugar, and the dried, ground-up seeds of Myristica fragans–the nutmeg tree.

Between boardings, burnings, sinkings, kidnappings, rapes and murders, pirates may have suffered from boredom, and even clinical depression. Nutmeg contains a monomine oxidase inhibitor, mimicking the action of some modern pharmaceutical antidepressants–or is the other way around?

At high doses–five to twenty grams, enough to gag anyone but a pirate–nutmeg is a mild narcotic and hallucinogen. However, these effects come at a cost–vomiting, diarrhea, constipation, psychosis and coma among them.

What resembles a pile of cedar shavings, but smells like apple pie? Along with nutmeg, mace is a product of the tropical evergreen, Mryistica fragrans. It is frequently described in the literature as the only plant in the world that produces two different spices simultaneously. (There is, however, at least one other, which you will find discussed below.)

Tightly surrounding Myristica's seed (the nutmeg) is a bright red or purple net-like structure called the arillus. This arillus is mace, which when dried turns a deep, rich amber. Surrounding the seed and arillus is a succulent fruit.

With the Dutch diverted by warfare with Napoleon, the wily English smuggled Myristica into Grenada, ending Holland's monopoly on nutmeg. Today, Grenada produces forty percent of the world's nutmeg, a crop so important to the three-island nation's economy that when independence from Britain was declared in 1974, it was incorporated into the design of her new flag, immediately below. 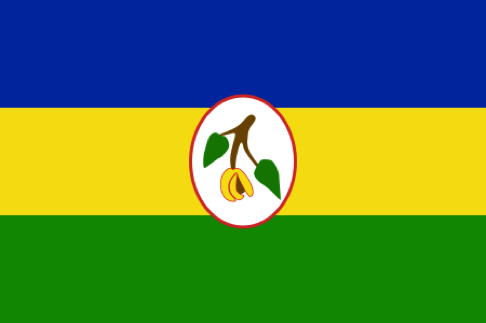