Call me a cornball. But on the Fourth of July, I forget my aching corns, and reflect upon my salad days in the Garden State.

A fresh chlorine overdose hisses from the breeze-ruffled surface of Fair Lawn Memorial Park pool. The first test volley is fired at quarter-to-nine, its vapor trail drifting languidly across the darkening sky.

The odors of gunpowder, charcoal lighter, idling police cruisers, punks of both kinds, Marlboros and DEET mingle in the airless night, while more Topps hamburgers, Ball Park franks, and Kraft marshmallows than you can shake a sharpened stick at are immolated in offering to the Spirit of '76.

But none of these olfactory associations are more evocative of our annual celebration of national independence than the complex, slightly sulfurous perfume of Jersey sweet corn. And by tradition, the Fourth of July is the kickoff date for our democracy's most distinguished delicacy.

Everyone acknowledges that Jersey sweet corn is without equal. What master chef’s pièce de résistance could even come close to a sun-warmed ear of Country Gentleman or Silver Queen right off the stalk?

But the super-eminence of Jersey corn is due neither to variety nor horticulture. The same varieties are grown throughout the United States. And while Jersey’s loose, rich, well-irrigated soil and abundant sunshine are ideal for the cultivation of sweet corn, similar terroir is found in many other places.

In an effort to buy Time, university and seed-company scientists have cast aside the time-honored technique of selective breeding in favor of genetic manipulation. At the time of this writing, more than eighty percent of America’s corn crop has been genetically modified. One result of this new technology are varieties that are both far sweeter than traditional strains, and much slower to convert their sugar to starch.

This offers a huge advantage to big growers and shippers–corn that can travel across the country, and endure almost indefinite storage with minimal deterioration–fresh corn, year in and year out, at your neighborhood supermarket, wherever that may be. Sound like a good thing?

Think again. The seed that was once available to every American farmer has become the exclusive intellectual property of a handful of corporations, who control its distribution and sale through our federal patent courts. Then to hedge their hegemony, these corporations have so twisted corn’s DNA that the seed set aside from each harvest for the next season’s crop–the very practice that first made agriculture possible fourteen thousand years ago–will be sterile.

Farmers still wishing to grow corn, then, will be forced to buy new seed each and every growing season from its patent holders. Could this be what Karl Marx meant when he wrote that capitalism contains the seeds of its own destruction?

There will never be a place at my family’s Independence Day table for genetically manipulated corn. From a purely gastronomic perspective, these super-sweet varieties lack the complexity of flavor that true corn lovers yearn for through every winter and spring. At the approach of summer, excitement builds. Then, when the Fourth of July arrives, we can’t get enough until autumn, when the natural cycle comes to a wistful close. So buy local, find a farmer who grows non-GMO corn, and if you must pay a few pennies more, do so with gratitude for the farmer's integrity and toil.

My best advice for storing fresh corn is–don’t. To ensure an uninterrupted supply throughout the growing season, farmers plant early, medium-early, main-season, and late-season crops – often on a day-by-day schedule. Don’t buy more than you can consume within twenty-four hours.

Try the well-known fingernail test if you insist. But unless you are trying to distinguish between corn-on-the-cob and cornflakes, it’s not very reliable. I once tried it on an ear that had languished in my refrigerator for three weeks, and the milky liquid, which by then probably tasted like typewriter correction fluid, was still flowing cornucopiously.

There are five main strains of corn: pop, dent, flour, and sweet. All were in existence on November 5, 1492, when the first Spanish explorers made contact with the natives of Cuba. Kernels found in Mexico’s Tehuancan Valley date back to 5,200 B.C.

Corn is the most important cereal crop in the Western Hemisphere, where half the world’s crop is grown. A profligate eighty-five percent of our domestic production is used to feed livestock. Most of the remainder is manufactured into a wide range of commercial and industrial products such as cornstarch, cornflakes, hominy, high-fructose corn syrup, soap, glue, antibiotics, and ethanol.

The corn production of Iowa not only surpasses that of any other state, but that of any other nation. Even in countries where corn is of great importance, people remain bemused by the American custom of eating corn-on-the-cob. Around the time of the American Revolution, a French food writer attributed our habit of eating with our elbows on the table to our predilection for corn au naturel.

The number of sweet corn hybrids is staggering, with new ones seeking their place in the sun every year. Those best suited to life in the Garden State will be listed in the Commercial Vegetable Production Recommendations Extension Bulletin, published annually by the Rutgers New Jersey Agricultural Experiment Station. Copies are sent to farmers, who are given recommendations as to how, when, and where to plant which hybrids for maximum yield.

Whoever dreams up names for the new hybrids every year deserves a prize for corny poetry. Current varieties recommended for planting in New Jersey include Sundance, Bodacious, Tuxedo, Incredible, and Summer Sweet (yellow); Silver Princess, White Out, White Saturn, Sweet Ice, Ice Queen, Avalon, Argent, and Silver King (white); and Sensor, Temptation, Providence, Sweet Rhythm, and Delectable (bicolor). But unless you are a farmer, varietal differences are much less important than freshness.

Corn lovers are strongly divided on the merits of white vs. yellow. I am ashamed to admit that when it came to corn, my otherwise politically progressive parents were unregenerate white supremacists. From childhood, it was drummed into my head that yellow corn was fit only for animal fodder. It was not until my vistas broadened in college that I became liberated from my parents' egregious color bias.

While either color can be superb, the beta-carotene that makes corn yellow also gives yellow corn a slight nutritional edge. Yellow strains are also somewhat more fragrant. Perhaps bicolor varieties represent the best of both worlds.

Next to a brush with margarine, the worst fate that can befall an ear of corn is overcooking. Delicious right off the stalk, corn doesn’t need to be tenderized or chemically altered by cooking–just heated through, then promptly eaten.

If you are cooking more corn than can be consumed in one round, put all the ears–husks and silk removed, of course–into a large stock pot. Fill it with plain cold water – salt will toughen the kernels, and adding milk or sugar is plain cheating. Place over high heat. As soon as the water boils, shut it off–the corn is done. Heat retained by the large volume of water will keep the second round hot without overcooking it.

On the other hand, if you require only as many ears as can be eaten in a single round, you will save time, fuel, and even a few vitamins and minerals by cooking them in a single layer in a covered skillet or frying pan, adding only enough water to cover them.

I like to melt butter in a pan, and let people paint it on with a cheap natural-bristle brush from the hardware store. My father always buttered a piece of bread, then used it to butter his corn.

A few summers ago, the Patel family next door introduced us to corn-on-the-cob Indian-style. In Mumbai, where street vendors sell it as a popular snack, it is called bhutta. The secret ingredient is black salt (really pink or pinkish-gray), a mineral mined from extinct volcanos. Called kala namek in Mumbai and sanchar in Gudjarat, black salt is sold in every Indian grocery store. its high sulfur content gives it a potent rotten-egg smell that is initially off-putting, to say the least. After a time or two, however, you may find yourself as addicted to it as I am.

Beginners are advised to mix the black salt with an equal volume of fine white sea salt, and whatever quantity of hot red pepper you are able to tolerate. Cut some lemons in half, and set them aside.

Cook the cleaned ears of corn on the grill, turning them until heated through and dotted here and there with black spots (the corn). Each diner applies the black salt mixture to the their ears with the lemon. Have plenty of ice-cold beer at the ready to douse the flames.

Special thanks to our doctors, nurses, first responders, scientists, farmers, migrant farm workers, truck drivers, U.S. Capitol police, journalists, and our fellow Americans serving overseas. Without all these special people, there would be no Fourth of July. 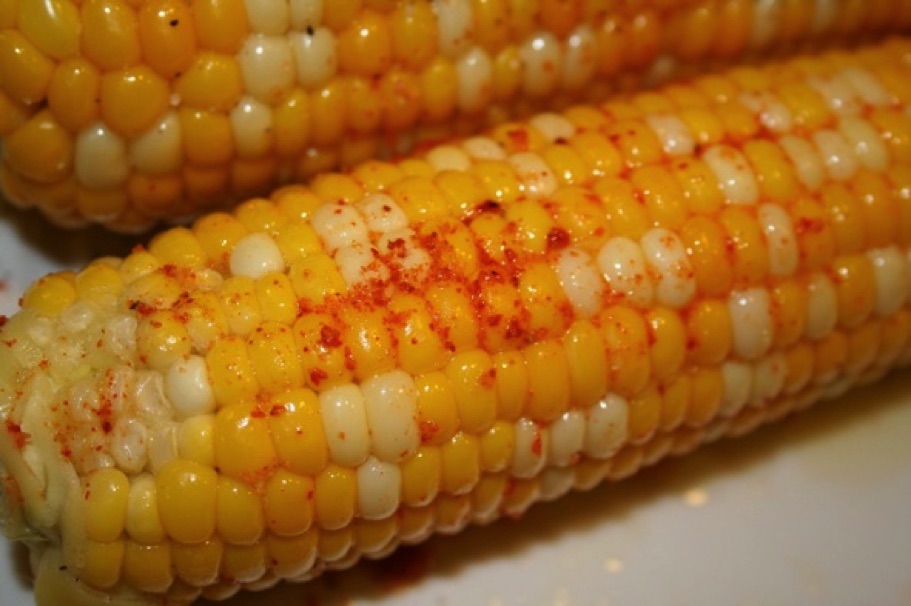