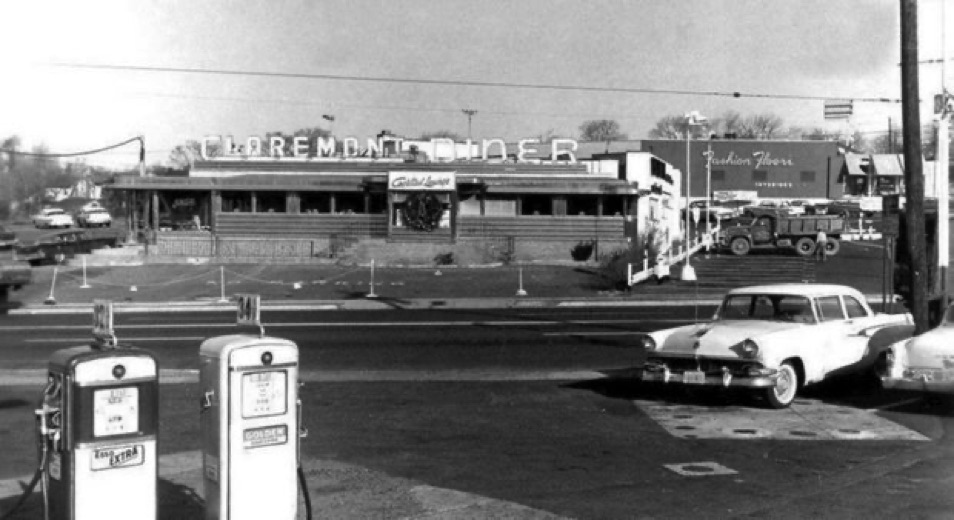 Courtesy of the Verona Historical Society

Compared to the menu at the legendary Claremont Diner (the real Claremont in Verona–not the counterfeit version that some interloper opened on Route 3 in Clifton after the original burned down), Proust's seven-volume "Remembrance of Things Past" reads like a recipe on a tube of refrigerated cooky dough.

What the hypersensitive auteur  would have made of the Bauman brothers' chopped liver-and-corned beef sandwich is a question that scholars of fin de siècle  literature will be wrestling with deli men over long after we are gone (the old intellect vs. counter-intuition debate?). But one bite of Morris's cheesecake or Leo's Nesselrode pie, and Marcel's memories of those mushy madeleines would have been toast (make that whole wheat, hon–lightly buttered).

The menu's sheer monumentality made commitment to a single item a near impossibility. So to get your hippocampus over the hump, each table was provided with a big bowl of mouthwatering full-sour pickles, and the Claremont's signature salad.

Morris and Leo never claimed to have invented Claremont Salad. However, they were serving it as far back as the early 1940s in their first collaboration, the quintessential Weequahic Diner on Elizabeth Street in Newark. In those days, the boys just called it "diner salad," and left it at that. Meanwhile, very similar salads were offered by every Jewish deli and appetizing store, where it was often referred to as "health salad." That's as far as I have been able to get in determining health salad's origin. But it may go back to ancient times–perhaps the original recipe burned with the Great Library in Alexandria. Because the medicinal reputation of cabbage, health salad's main ingredient, was already well established by the second century B.C., when Cato wrote "It's the cabbage that surpasses all other vegetables. It may be eaten either cooked or raw; if you eat it raw, dip it into vinegar."

Surely, then, Cato would have approved of health salad's 1:4 ratio of oil to vinegar–the inverse of the 4:1 in classic vinaigrette. This keeps health salad low in both fat and calories. Cato went on to write many more words in praise of cabbage, recapitulating Pythagoras's plaudits from three centuries earlier, and presaging Pliny's, two centuries later. In our own time, molecular science has vindicated Cato and his classical colleagues as it begins to unravel the complex biochemistry that makes cabbage and its cultivars unique in their ability to prevent, forestall, and slow the growth of tumors of the breast, ovaries, lung, prostate and colon. They have also been shown to exert a salubrious effect on the heart, arteries, and brain.

Indeed, the words salubrious and salad share the prefix sal, which is Latin for salt. So like tuna fish, pizza pie, minestrone soup, and more recently, mesclun mix, health salad is linguistically redundant.

Come to think of it, if you put them all together, you've got yourself a very nice lunch (easy on the mayo, hon). But hey–that's just my personal opinion, and not necessarily a true fact.

Make sure your knife is sharp, and have a 2- or 2-1/2 gallon plastic food bag ready. Quarter the cabbage and remove the core. Slice across the quarters into 1/8" to 1/3" wide strips. Slice the cores thinly,.  Place the cabbage in the plastic bag.

Halve the onion lengthwise, and place flat-side down on your cutting board. Slice crosswise 1/8" thick. Separate the slices, and place in the bag with the cabbage.

Peel the cucumber. Slice lengthwise, and using a teaspoon, scrape out the seeds, which for some people are hand to digest. Cut across into 1/8" half moons. Place in bag.

Slice the green pepper into 1/8" strips. Place in (you're getting ahead of me) bag. Do the same with the carrots and celery.

Smash the garlic on your board, sprinkle with salt, and chop very finely. Use the salt as an abrasive and the side of your blade to reduce the garlic to a purée. Place in a bowl.  Add the vinegar, oil, sugar, salt and pepper, blending with a fork or whisk.

Pour this mixture over the vegetables, seal the bag, and turn over a few times while messaging it gently. Place in the refrigerator. During the next twenty-four hours, turn the bag over whenever you get up to get a cold one.

Of coure, no ill effects will befall from eating it immediately. But it doesn't really turn into health salad until it's spent a day–preferably two–in the fridge. During that time, the salt, sugar and vinegar form a pickling solution that permeates the vegetables, tenderizing and flavoring them.

Soon, lactic acid fermentation takes over, and the sourness intensifies. I've thoroughly enjoyed health salad that's been fulminating in the fridge for a couple of weeks.

Note: Everybody who reads a newspaper or watches the food channel has been exposed to the term polyphenol. This refers to a large group of chemicals of similar molecular structure occurring in plants. A sizable subset of polyphenols are the anthocyanins. These powerfully protective pigments are concentrated in such lifestyle-section superstars as blueberries, cranberries, açaí, red wine, and red cabbage, and contribute considerably to their health benefits.

Accordingly, consider making red cabbage your default variety. The taste and texture of cabbage is unrelated to its color. Eyes closed, you couldn't tell the color of the cabbage you are eating.

But that is where the similarity ends: red cabbage contains more than four times the polyphenols of its paleface cousin. In case you think we are merely splitting micrograms here, red cabbage's VCEAC (Vitamin C Equivalent Antioxidant Capacity) surpasses its Caucasian kinsman's by an astounding eight hundred percent.

A study in Food Science and Technology concludes that "Additional consumption of vegetables such as red cabbage may be beneficial to increase chemopreventive effects in neurodegenerative diseases such as Alzheimer's. Because of its nutrition superiority, as well as the exciting color it brings to the table, I recommend using red cabbage whenever possible, including when making health salad.

However, be cautioned that when cooked, red cabbage must be combined with an acidulating agent, such as vinegar, lemon juice, sour salt (citric acid) or wine. Otherwise, it will turn a very unappetizing blue-gray color, although its nutritional value will be unaffected.

Agave syrup, sometimes called agave nectar, is a sweetener made by boiling the juice of the blue agave, the benevolent cactus that also provides us with Tequila. It comes in both light and dark–the darker color a result of longer cooking. The dark has a strong molassas-like flavor, making it less suitable as a general-purpose sweetener.

Agave syrup is one-and-a-half times sweeter than white granulated sugar. Its manufacturers' claim that because it is mostly fructose (unlike high-fructose corn syrup, which despite its name, remains predominantly glucose), agave syrup has a negligible effect on blood sugar.

With an assigned glycemic index of 27, compared with table sugar's G.I. of 142, agave syrup would seem to be a godsend for diabetics. However, agave syrup is not without its critics, who claim that its effects are even worse than table sugar's. 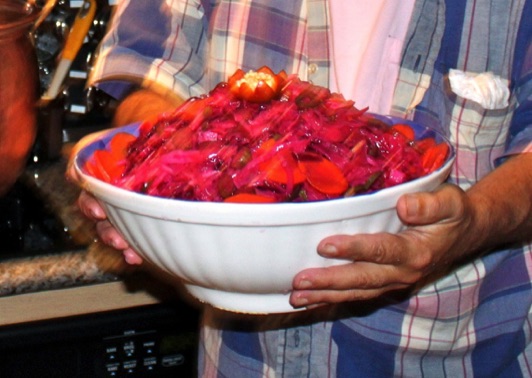 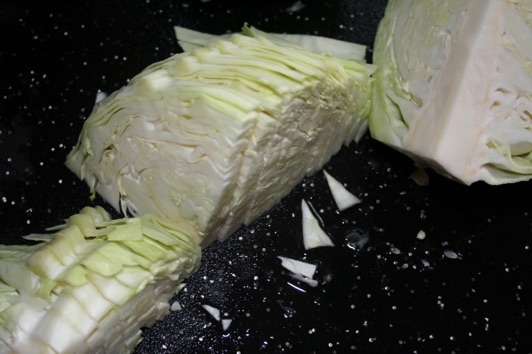 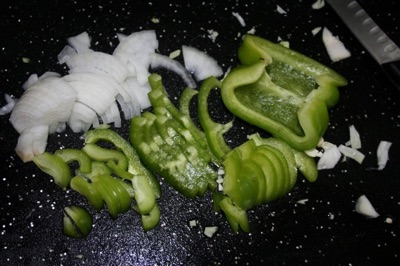 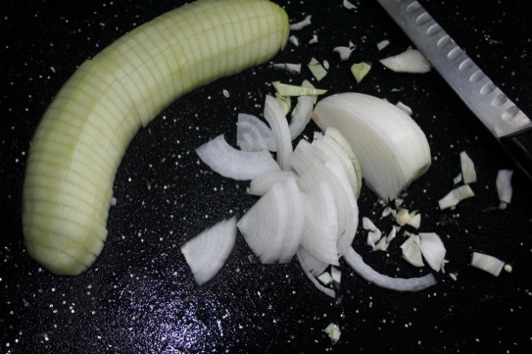